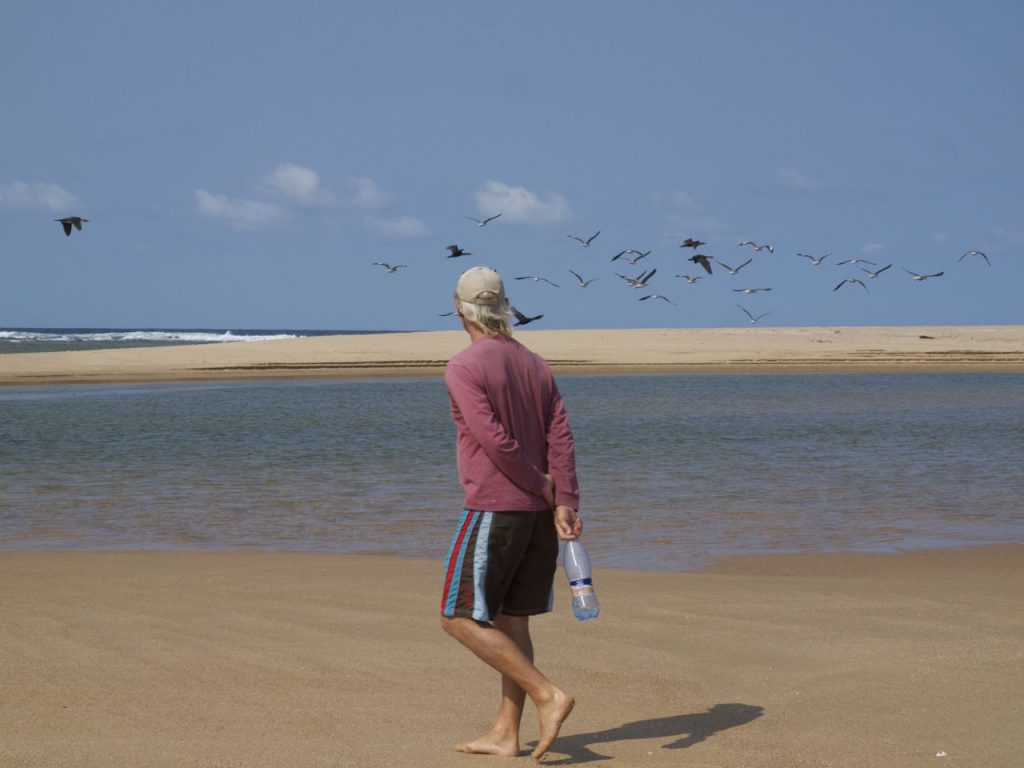 When Paradise hits earth to create natural beauty of its own you are most probably at Kosi Bay Nature Reserve in South Africa.

I just hope, there are no crocodiles crawling up to our tent or hippos flattening us during the night! I put a watchful eye to the admittedly stunning lagoon, which was only a few meters away from our flimsy tent. 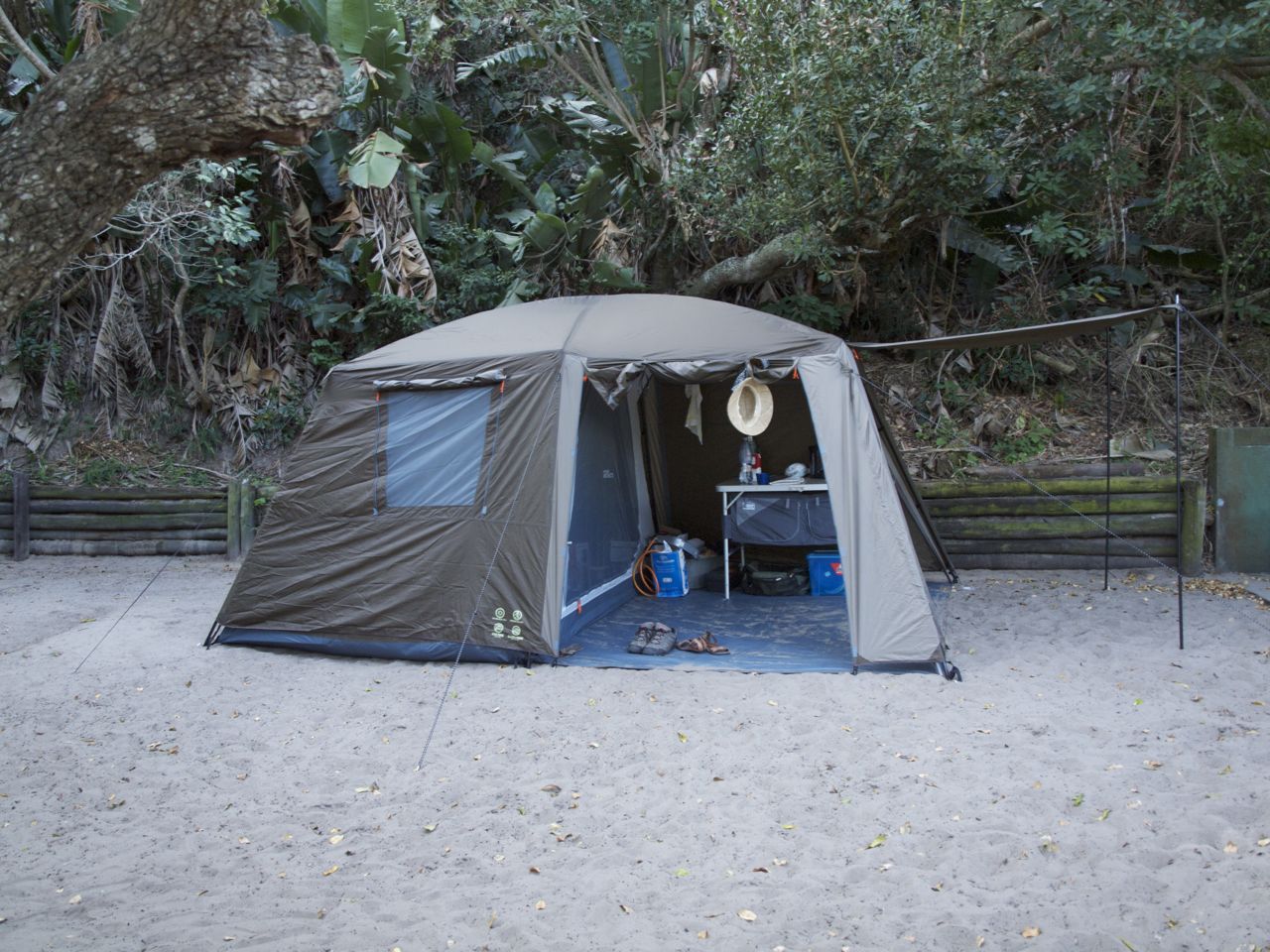 We had an unspoiled view from our campsite, which was the only one occupied of five. The campsites were all bordering the sparkling water, which was fed from the nearby Indian Ocean. Four lakes were interlinked like untamed beads on a string offering a dream for fishermen. A few tough guys in their shorts and bare feet arrived during the day with their fancy geared up, white flashy boats on trailers towed by impressive bright white double cab trucks. I wondered, why a majority of South Africans stick to white cars with the exception of the upper class officials or new rich preferring to be hidden behind intransparent blackened windows in their pitch-black, high-end European cars. Puzzled I learned that South African insurance companies asked a higher risk premium from drivers of red coloured cars. Undoubtedly there must have been evidence of shocking numbers of would-be Hamiltons speeding the roads of South Africa mostly with red cars. 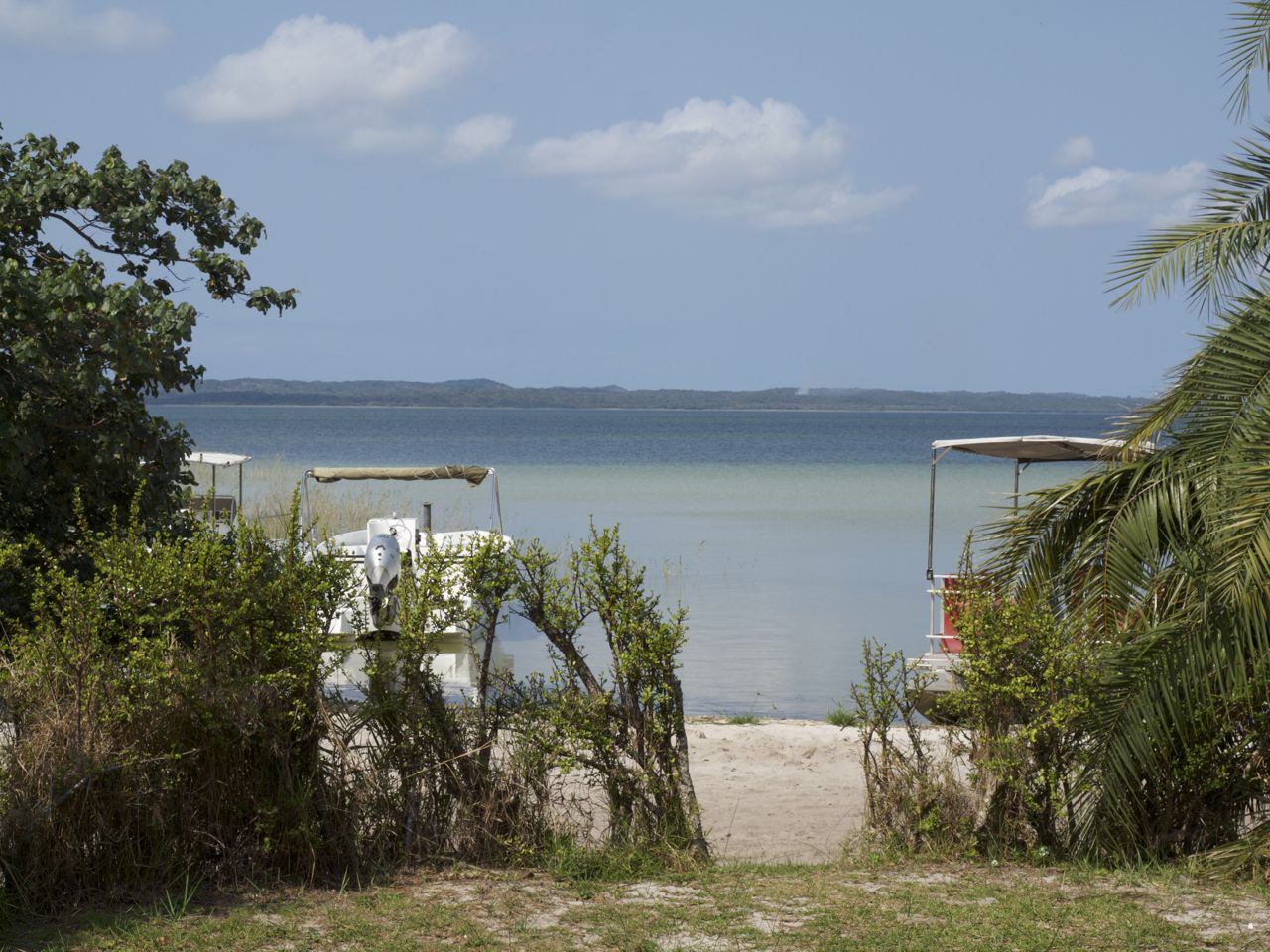 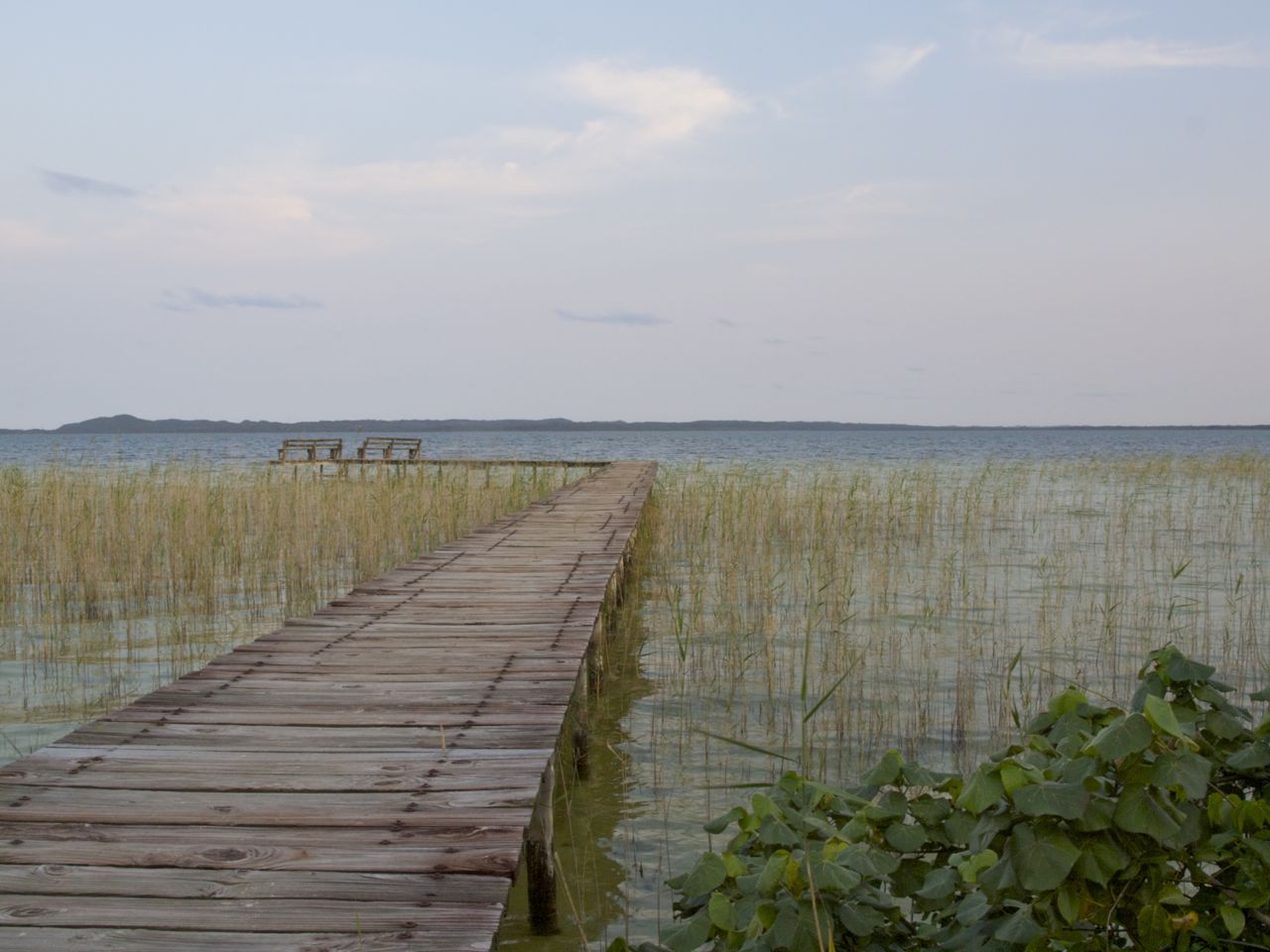 We managed to pitch our new tent and headed up to the entrance gate with its pint-sized reception hut next to it. We discovered more campsites tucked away in the coastal forest as we walked along the path to the gateway, which were well sheltered under the canopies. A must, when the sun blasts intensely during the summer months. But it was only August, early spring in South Africa, when even the thorn trees pleased the eye with their yellow flowers. “You get forty per cent off, if you purchase a Rhino card. It’s valid for a year and allows free entrance and no conservation fees to all the National Parks in Kwazulu Natal. And if you are over 60 years you get a further discount,” the lady in khaki uniform behind the counter informed us confidently with a bright smile. We followed her advice and booked for three nights with option to extend our stay. We intended to visit several National Parks in Kwazulu Natal as we travelled this time without our four-legged friend Vlou, the traveling Beagle. To travel with a dog in South Africa restricts visitors to areas outside of game parks. 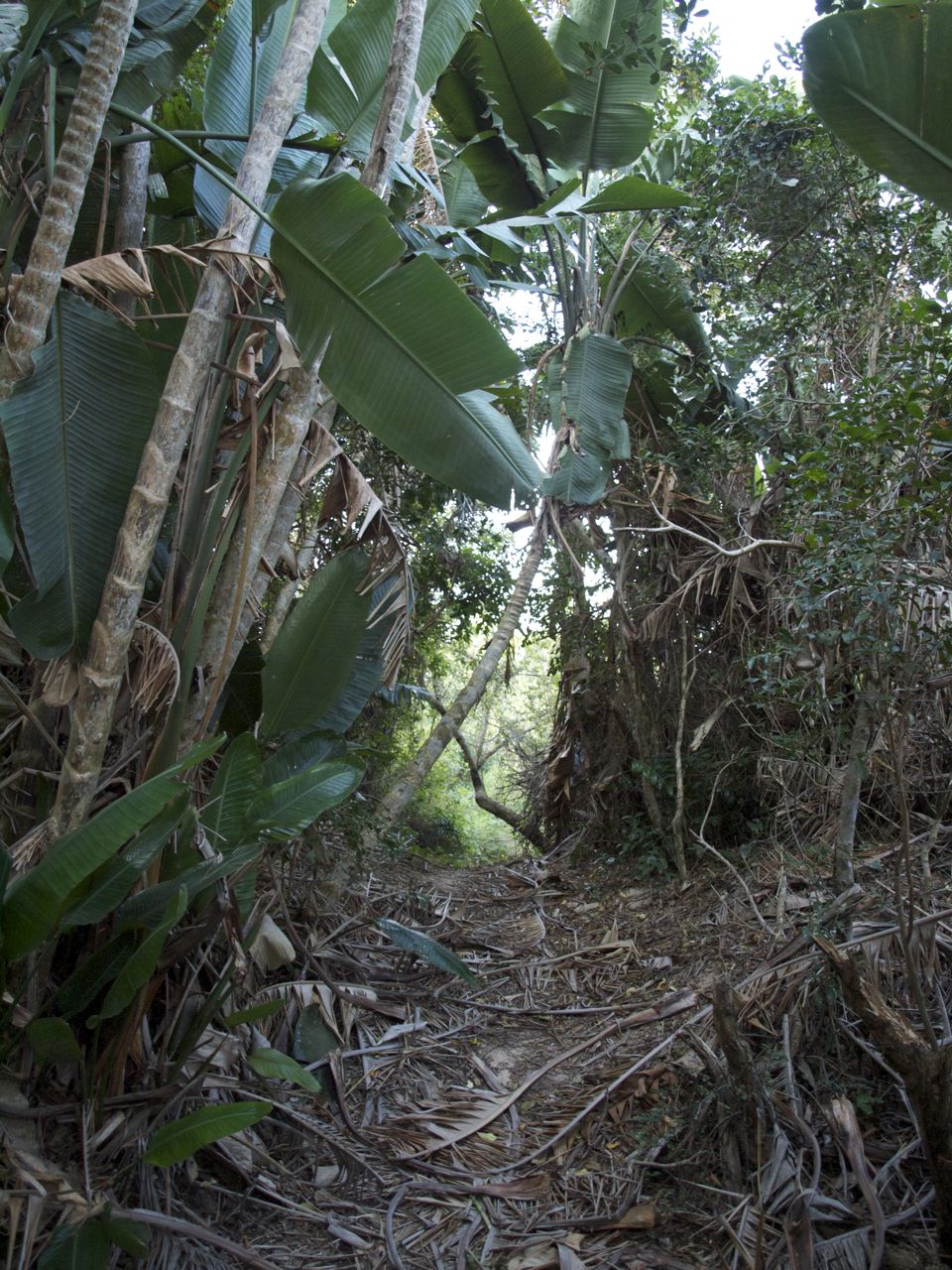 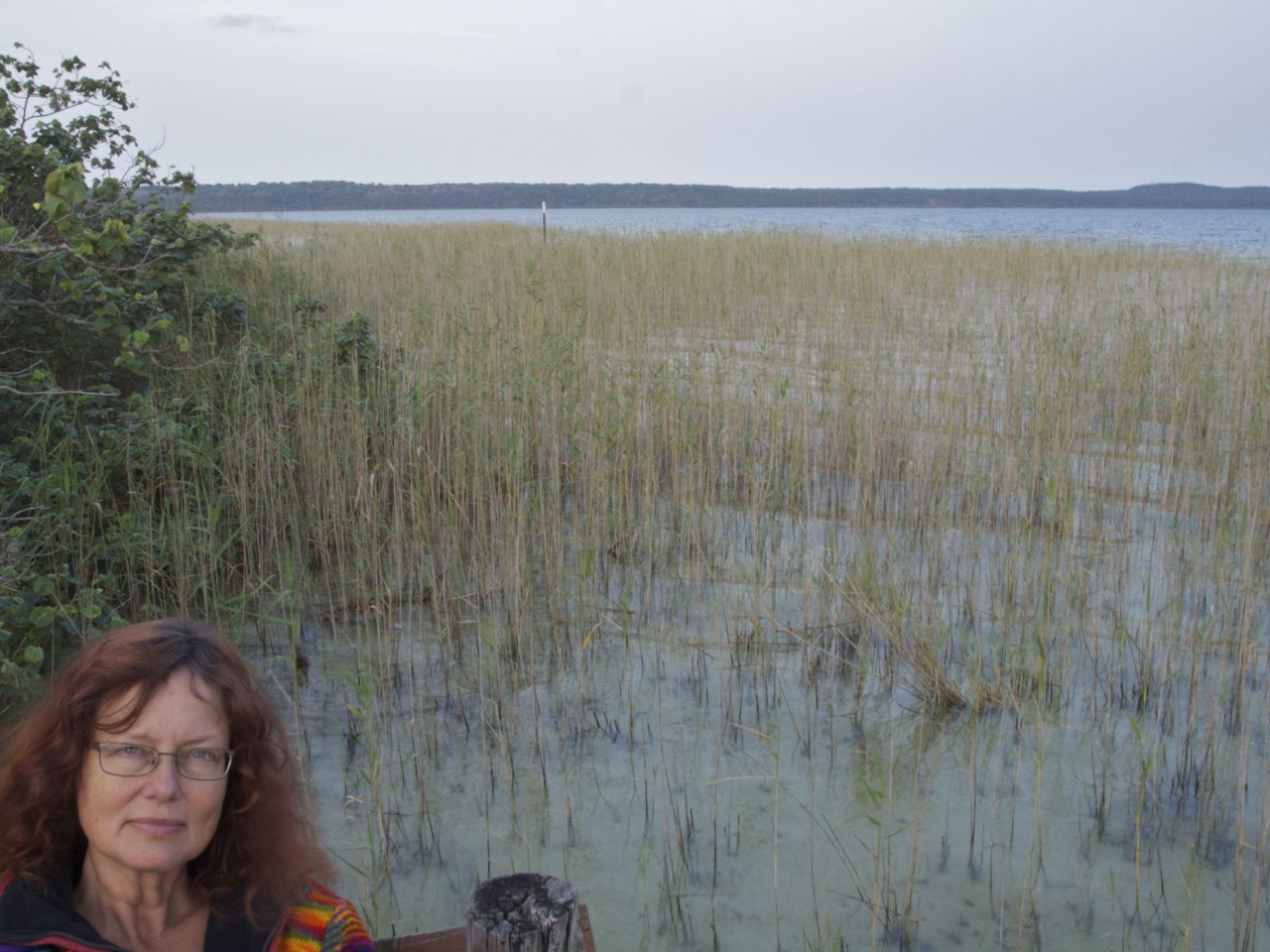 There were some paths within immediate reach of the campground, which led to breath-taking views of the bordering lakes. In the late afternoon we geared up with our camera to take some pictures. Plentiful bird sounds carried to our ears, but the birds were hidden in the thick bush. Only the call of two fish eagles turned our eyes to the sky, where they majestically performed a mating dance, circling around each other without barely having to flap there wings and to be carried by the thermals. 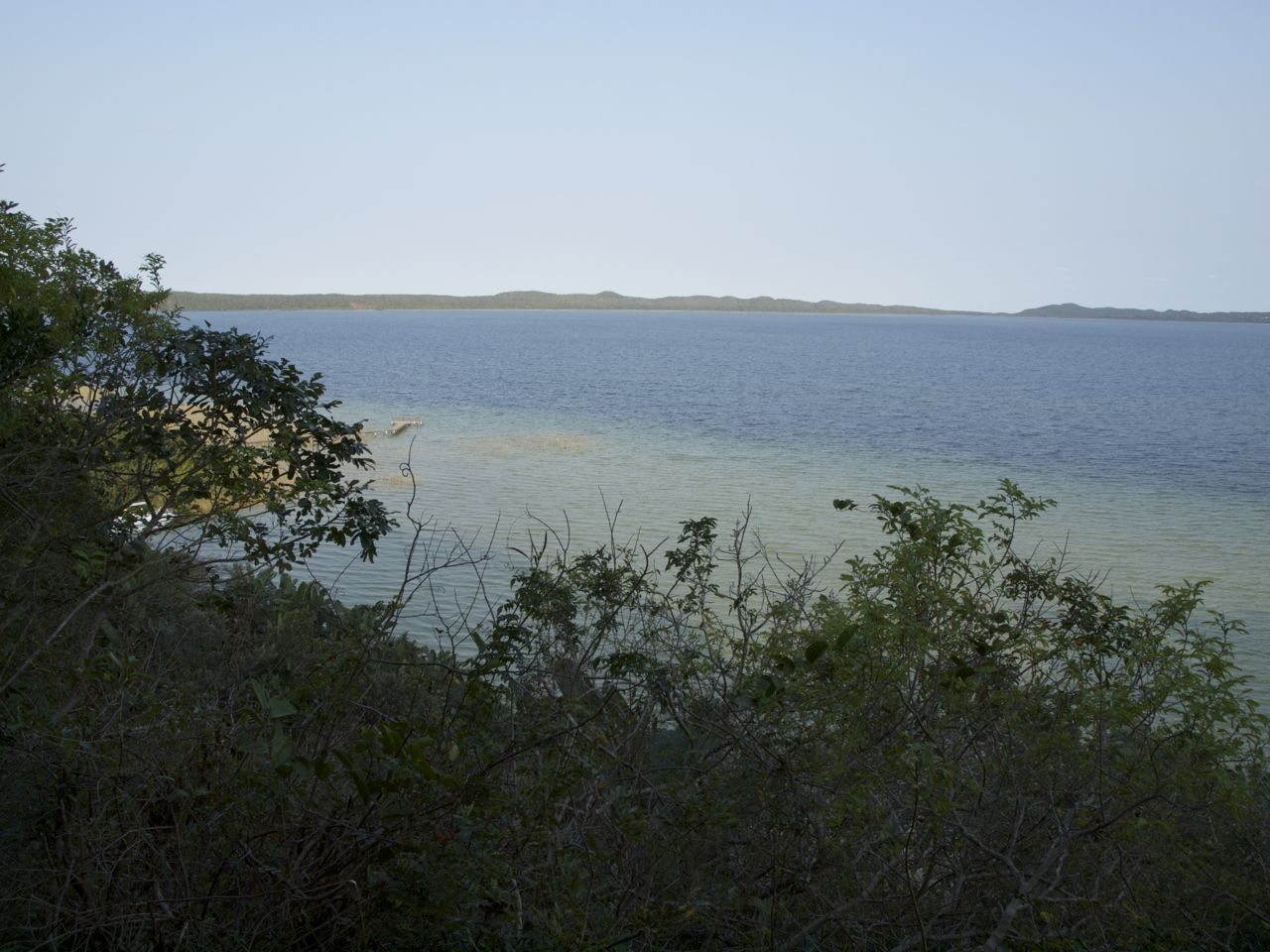 We decided the following day to drive to the mouth, where the lakes reached the sea. “Not far, not far”, the gate warden told us. When an African tells you its not far it may well be quite far! Having read that the road was only suitable for Off-road vehicles (4×4), we inquired, how the state of the track was and if it would be wise to proceed with our car without reduction gear unit. “Good, no problem,” he smiled convincingly. We drove off with a troubled feeling, that he hadn’t really understood, what we had been asking. 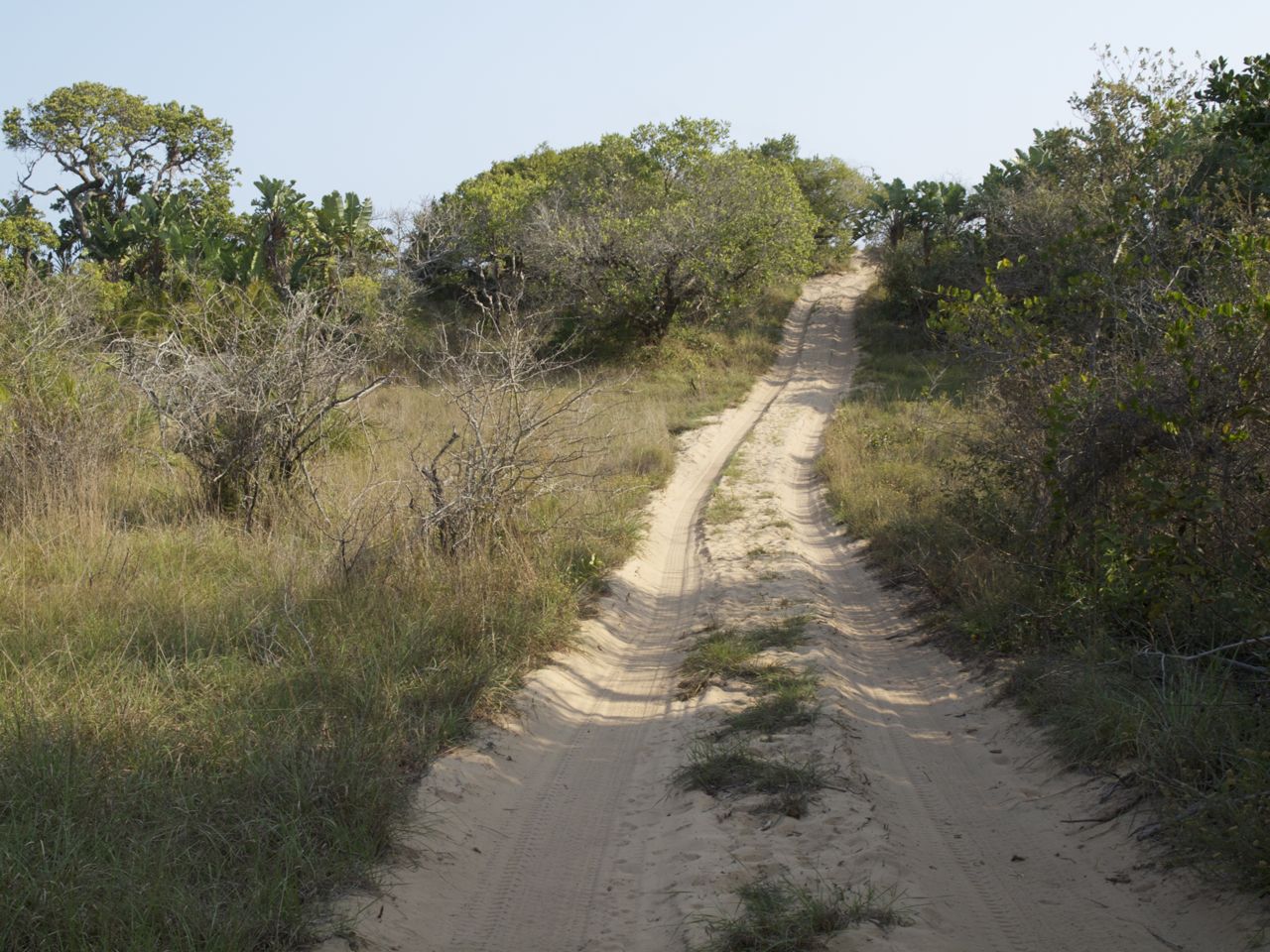 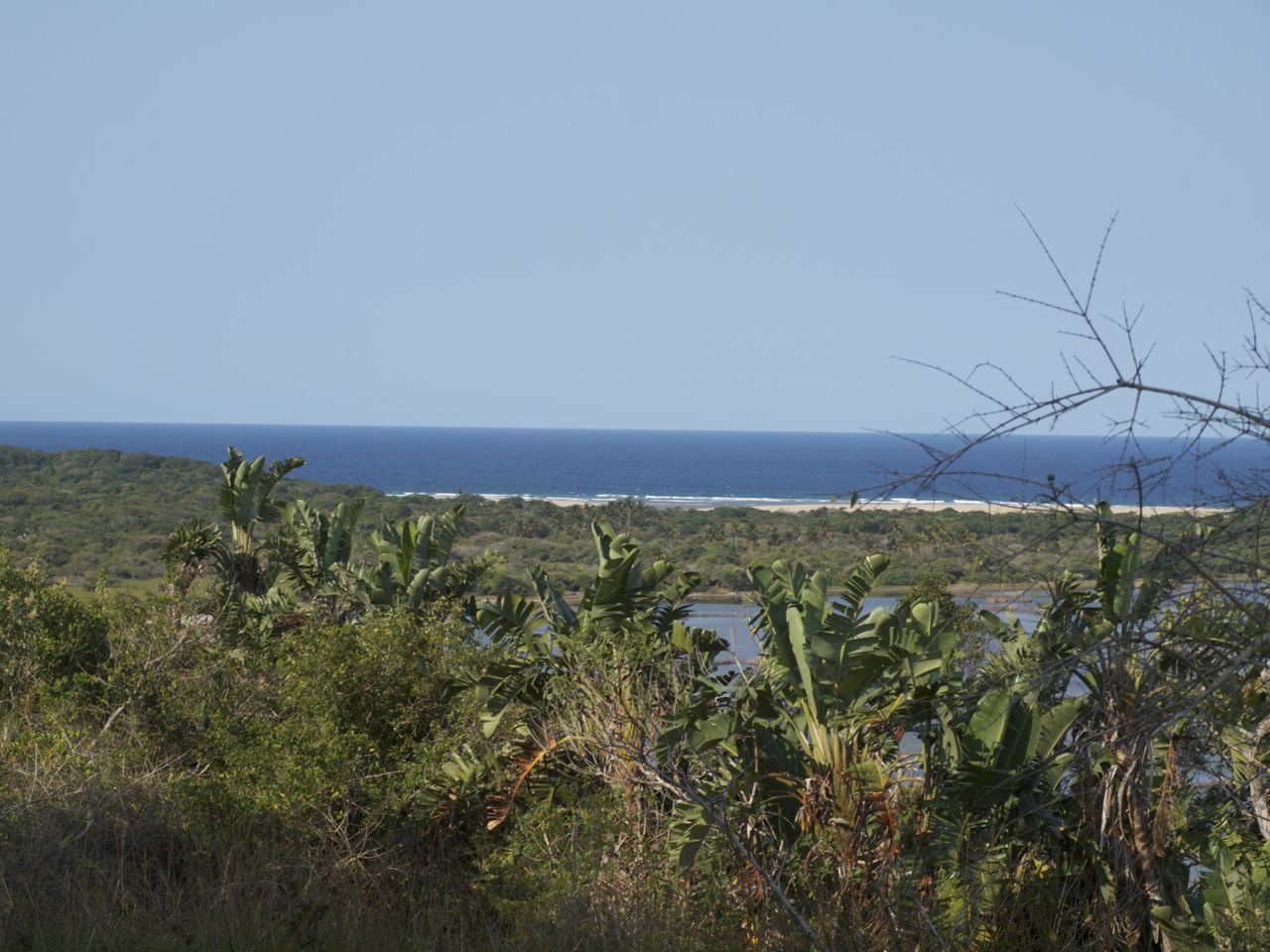 The sand tracks got troublingly deep in one ditch before a rising slope. Hoping that there were no hidden rocks under the soft sand I accelerated, which caused the car to perform a zigzagging course through the obstacle. I heard the bottom of the car scraping a heap of sand along as it dug itself through the critical spot. My heart beat in my ears as we finally reached the other side safely. We progressed for another approximately three kilometres to reach a most stunning sight at the coast, where only the pressure of the water at high tides opened the river mouth through the beach to the Ocean. We parked our car, where two car guards were waiting for a hand-out to keep our car safe. Flabbergasted, I assumed, there would be nobody other than themselves, who could probably steal anything out of the car or the car itself, as there was no other human life to be seen since we entered the National Park. Anyway, we gave them their overpriced twenty rand and headed off to the beach. 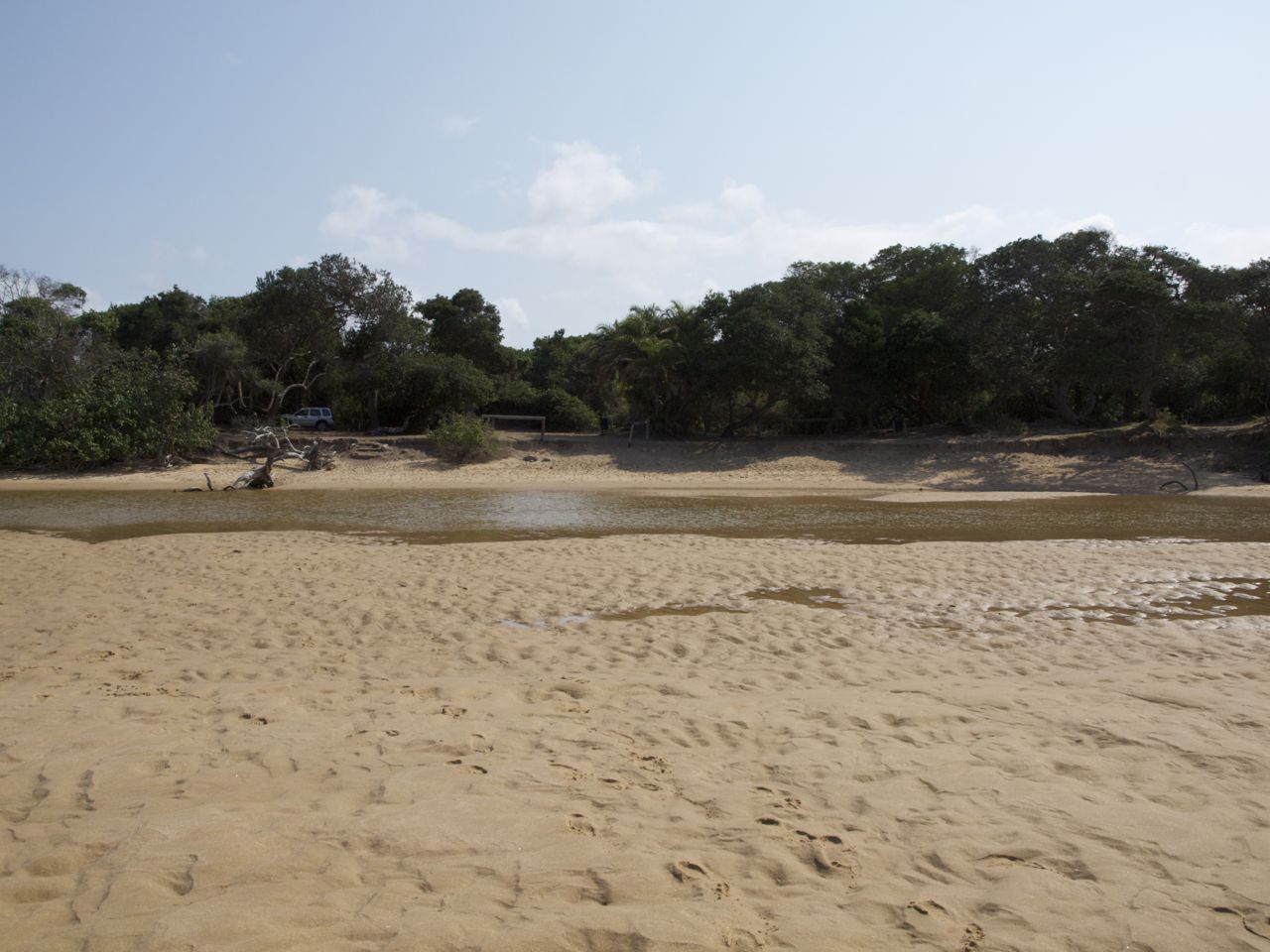 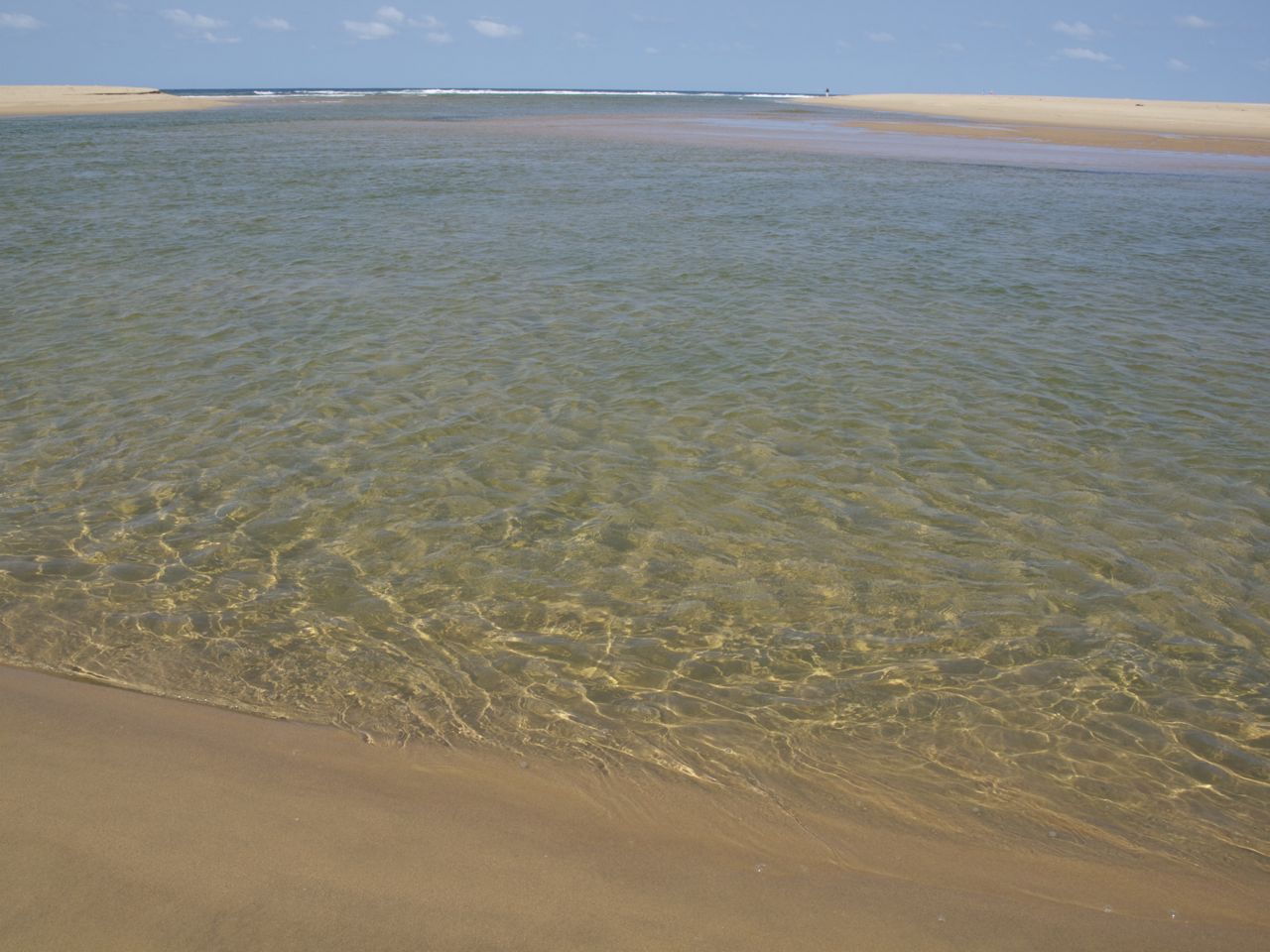 The wild nature exposed beautiful clear puddles and streams through the golden sand, where tiny fishes fed on plankton to small to be seen by our eyes. We waded through the water to be able to access the beach. I held my camera over my head as the water reached my chest and tried to stay steady on the slightly moving sand under my feet. We reached the seashore, where the unspoiled beach extended itself over indefinite length from the North to the South. A slight breeze curled the surface of the beach into a diagonal pattern of tiny dunes tickled by glittering grains of sand carried along with the wind. We sat down at a slope in awe, admiring the bare beauty of nature at this magical spot. 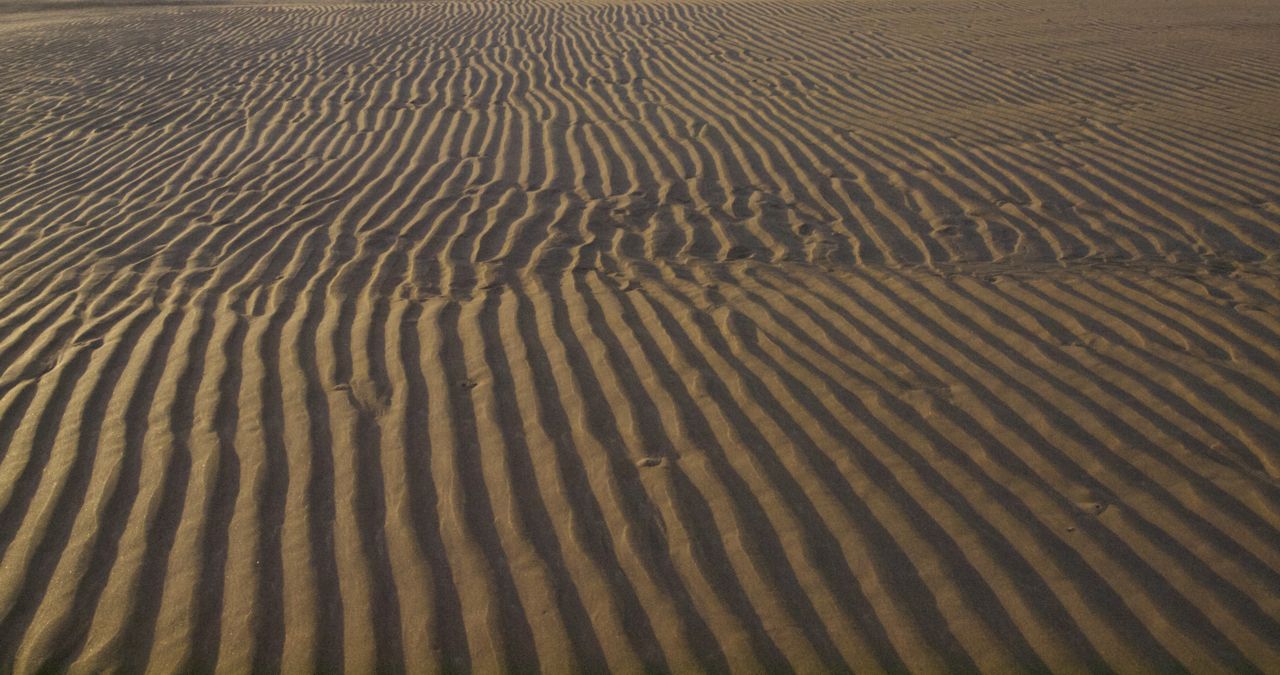 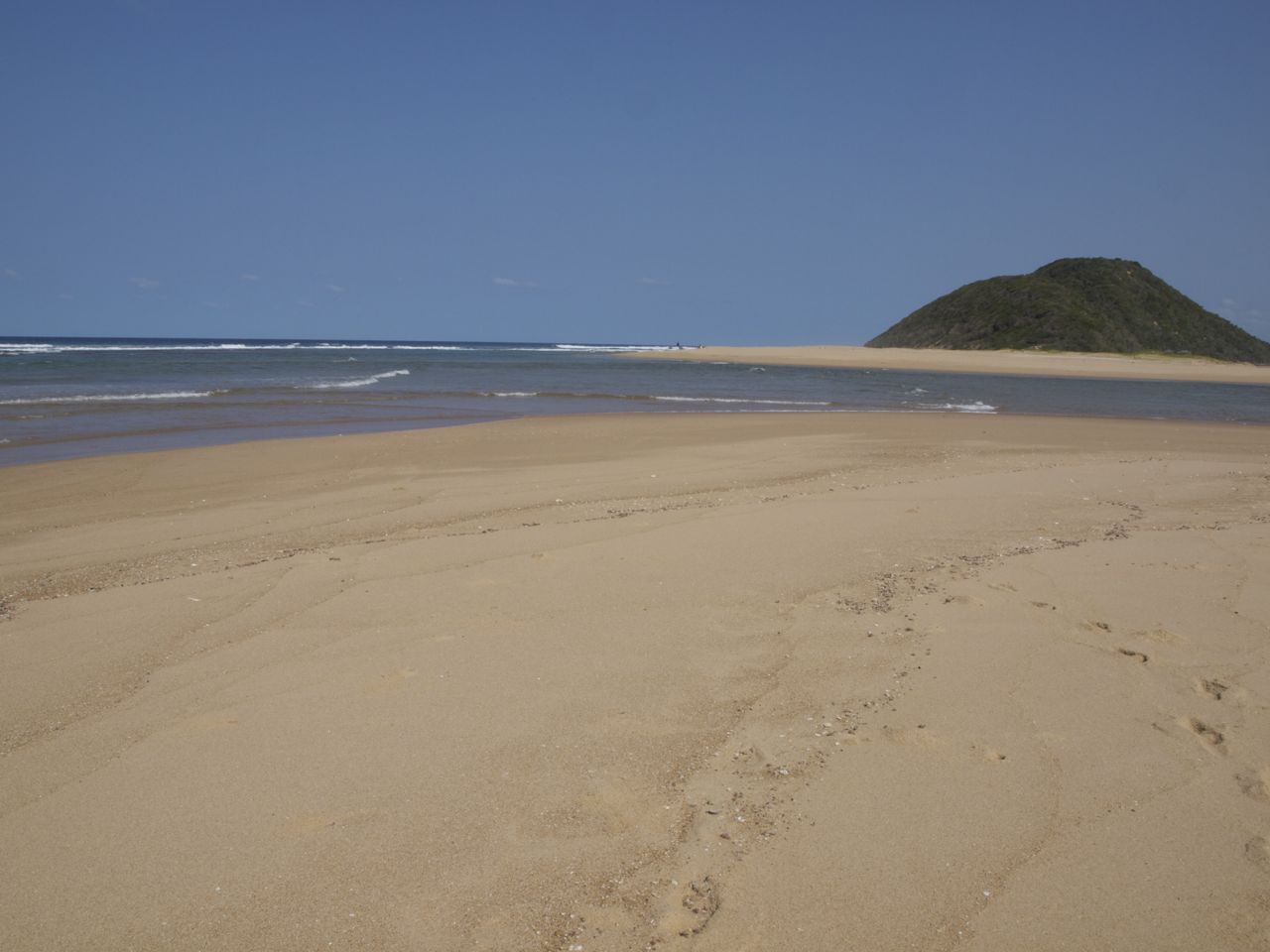