We were sitting in the bird hide at Mata-Mata rest camp in the Kgalagadi Transfrontier Park on the Namibian border at an early hour when only the hopeful wildlife lovers rise from their warm and cozy beds. Hoping for exciting animal sightings with a flask of coffee next to us, enduring sturdily the hard wooden bench and squinting through the dark trying to spot the first visitors at the waterhole.

As hot as it can be in the Kgalagadi the chill gets me in the early morning hours. I wrapped my blanket tight around me while trying to balance my cup and a rusk in the other hand. For the moment there were still more snores from the campground behind us than any animal sounds. 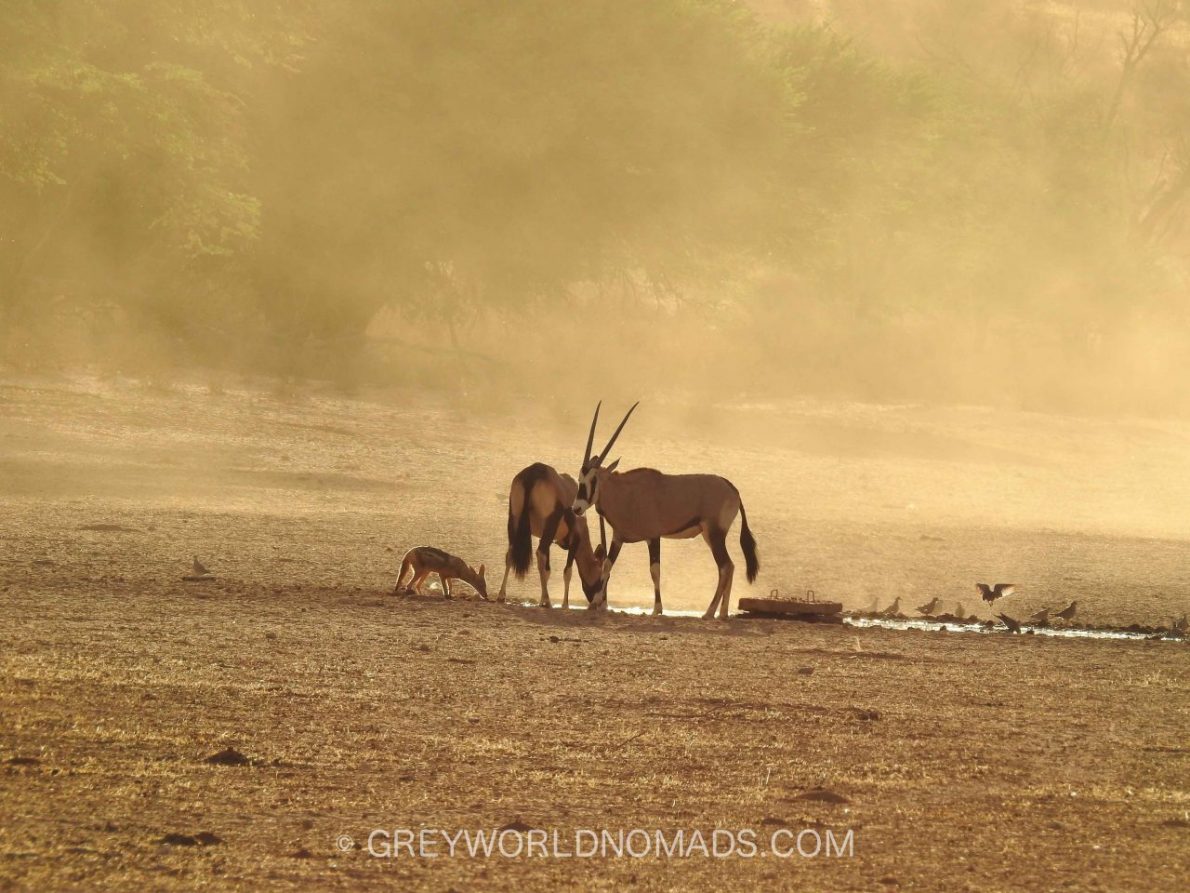 Are there lions out there?

“Wait, what’s that?” I whispered, trying to make out the dark shape approaching the waterhole in the far distance with the longest extension of my cameras lens. “Is it a lion?” Sometimes my mind fools me, as it seems to project to my inner eye what I’d love to see, like a wild cat, only to reveal a common antelope a few minutes later. “Argh, again it’s just a Gemsbok!” 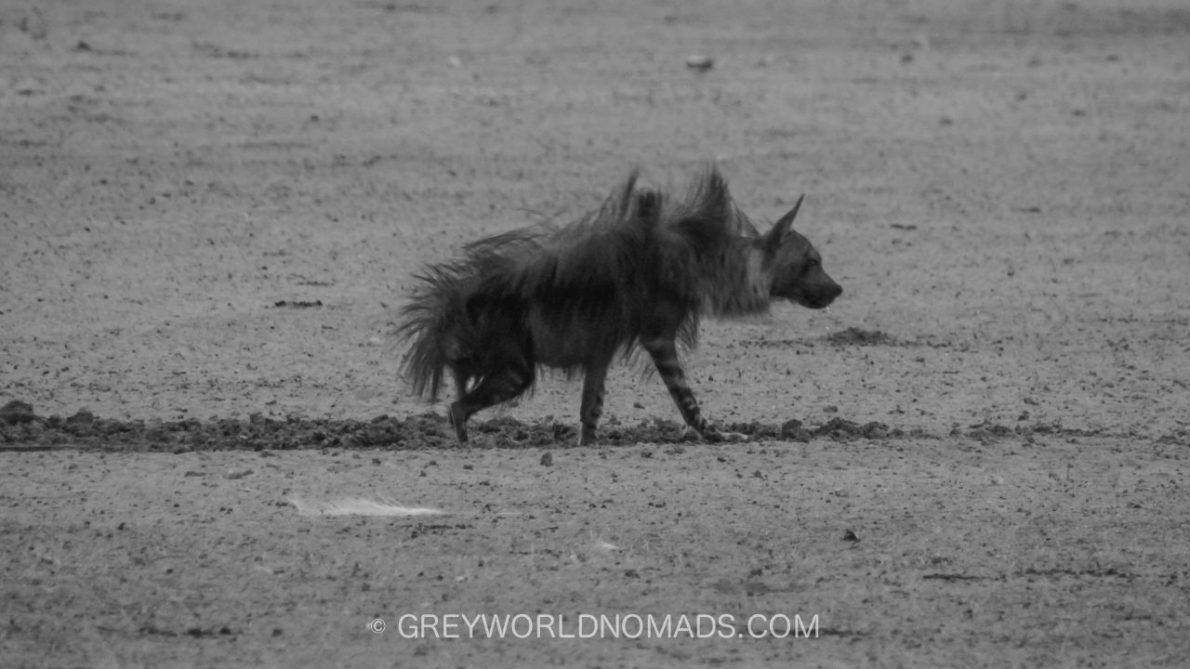 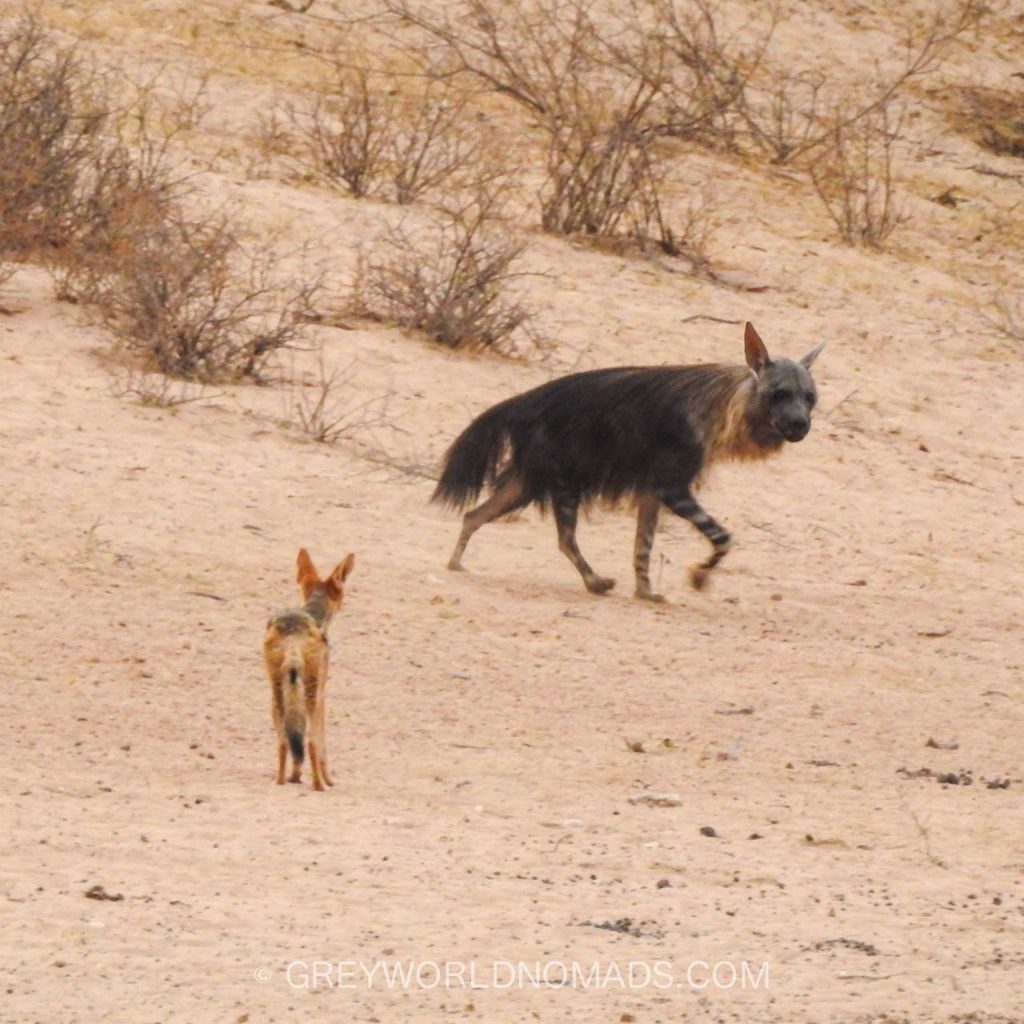 Jackal waiting for a brown hyena to cross

The wind started to pick up as dusk greeted the day. I tried to make out a shaggy shade moving hastily along. “It looks like a aardwolf or is it a hyena?” I murmured breathlessly. I barely managed to hold my camera lens tight as the wind blew increasingly. “I’m not sure from this distance. It looks very ragged to me! “, George muttered tonelessly as he adjusted his binoculars. “I think it’s a brown hyena, first time see!” he added excitedly. 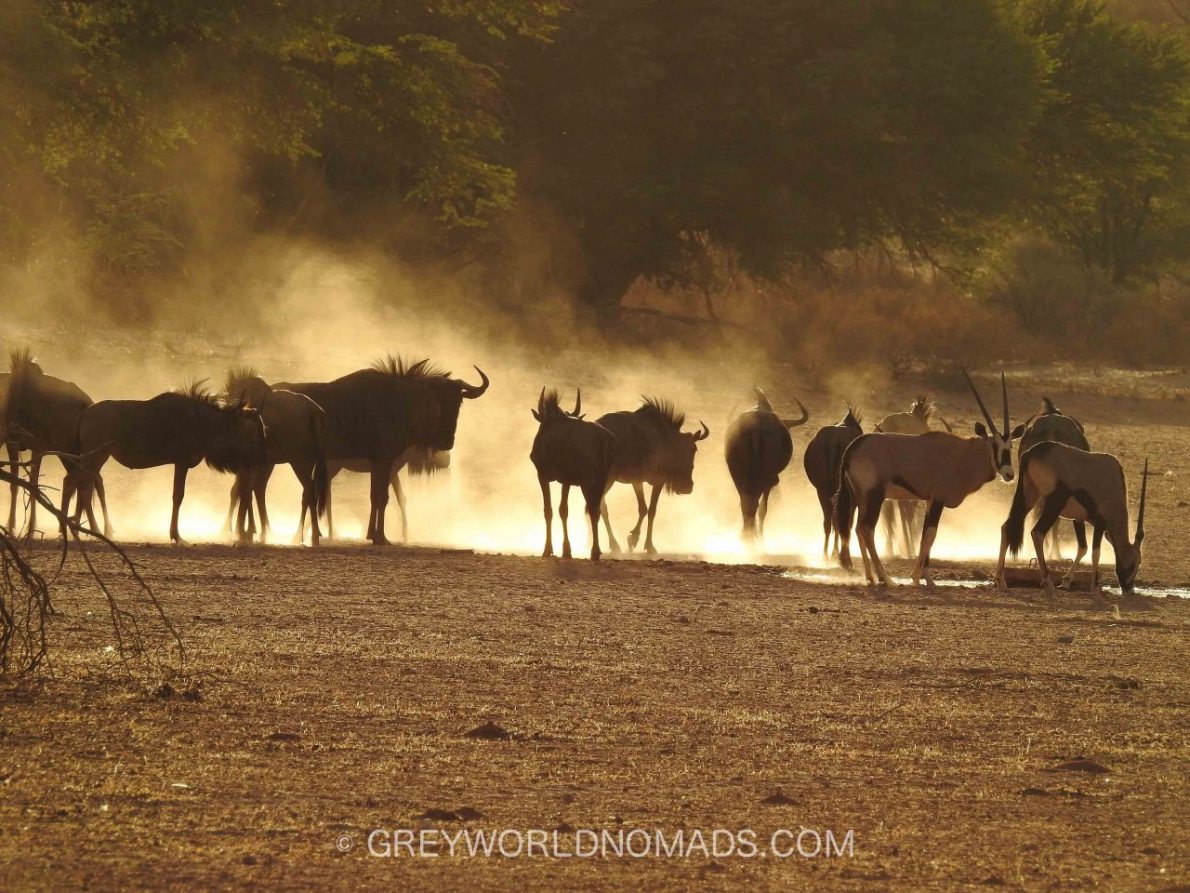 A herd of wildebeests and gemsboks in the dust

As quick as animals appear they vanish just as fast and quietly. The sunrise spread its magic glow over the dry, dusty Auob riverbed as a herd of wildebeests and gemsboks walked towards us. The wind caused a ghostly image of the horned animals with hooves stirring up the dust. 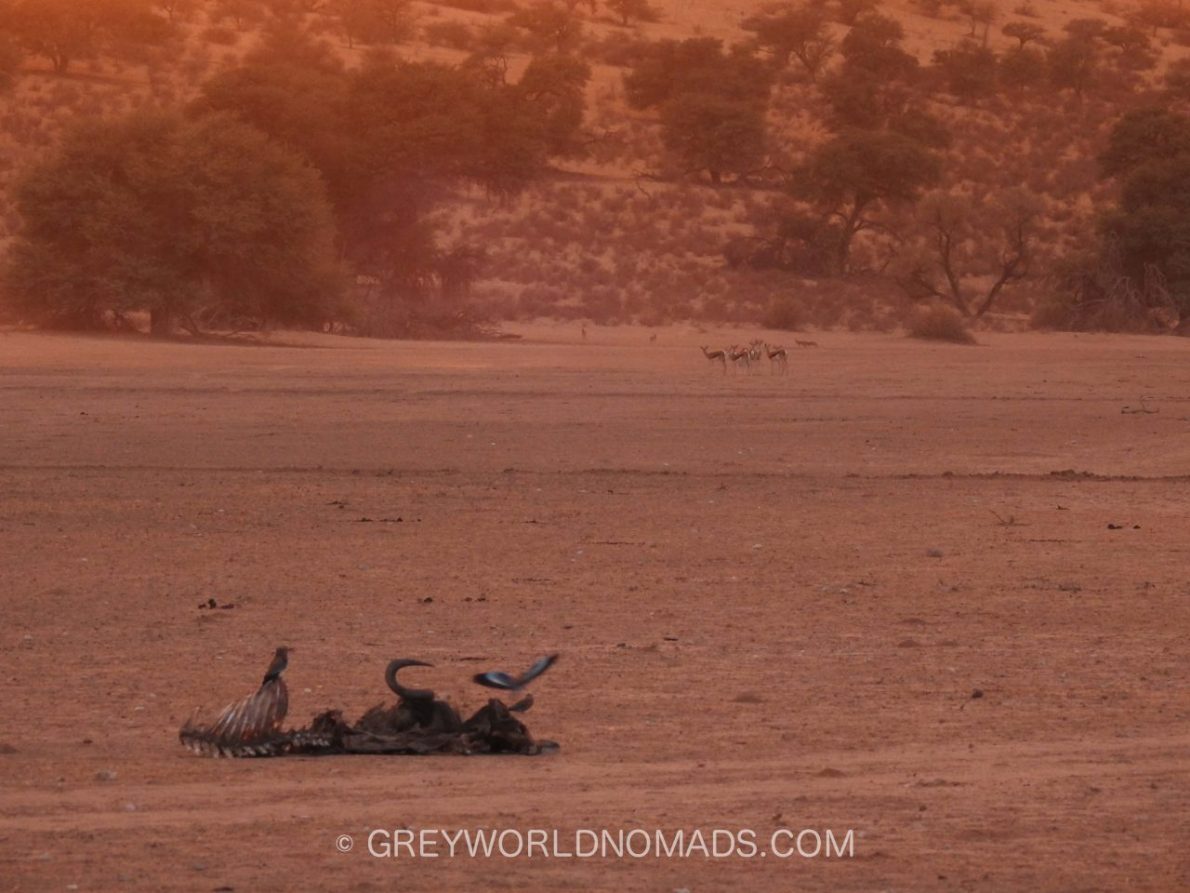 A jackal trotted casually in front of a herd of springboks. But wait a minute: “What’s that? It looks like wild dogs chasing springboks further behind!” I’m all excited as wild dogs are very seldom to be seen in the wild and even more less so in the Kgalagadi. Unfortunately my mind fooled me again. It was just a bunch of jackals having their fun with the most common antelopes of this game park, the springbok.

And yes! There are lions out there! 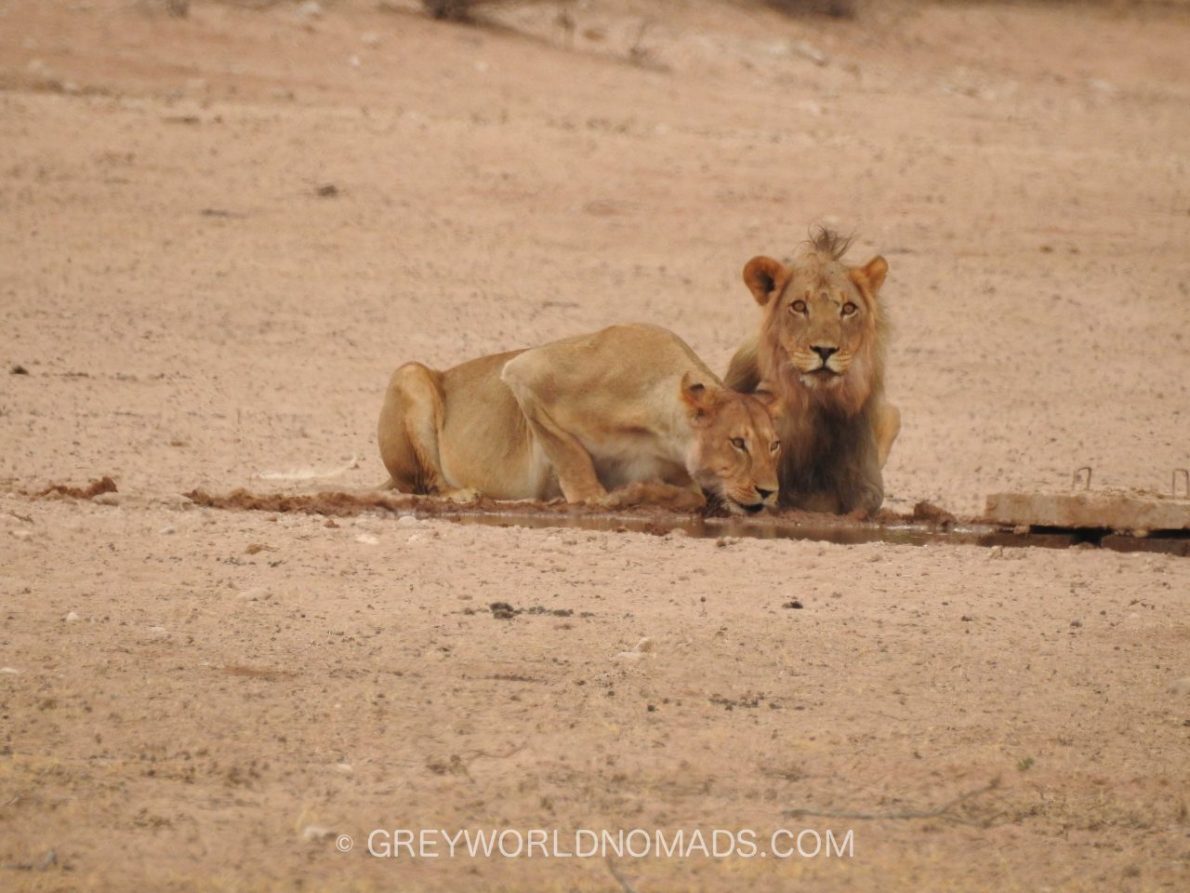 As it goes almost always, patience pays off and we got to see lions quenching their early morning thirst at the waterhole. A majestic male lion, whose roars had sent quakes over the grounds in the middle of the night, walked now proudly with his female partner across the riverbed. We had negotiated if we should get up already at these early hours in the middle of the night to try to see him. But lacking any light in the rest camp and just separated by a flimsy fence I had preferred to stay in our supposedly safe tent (or that was my excuse, anyway).

Most amused by meerkats 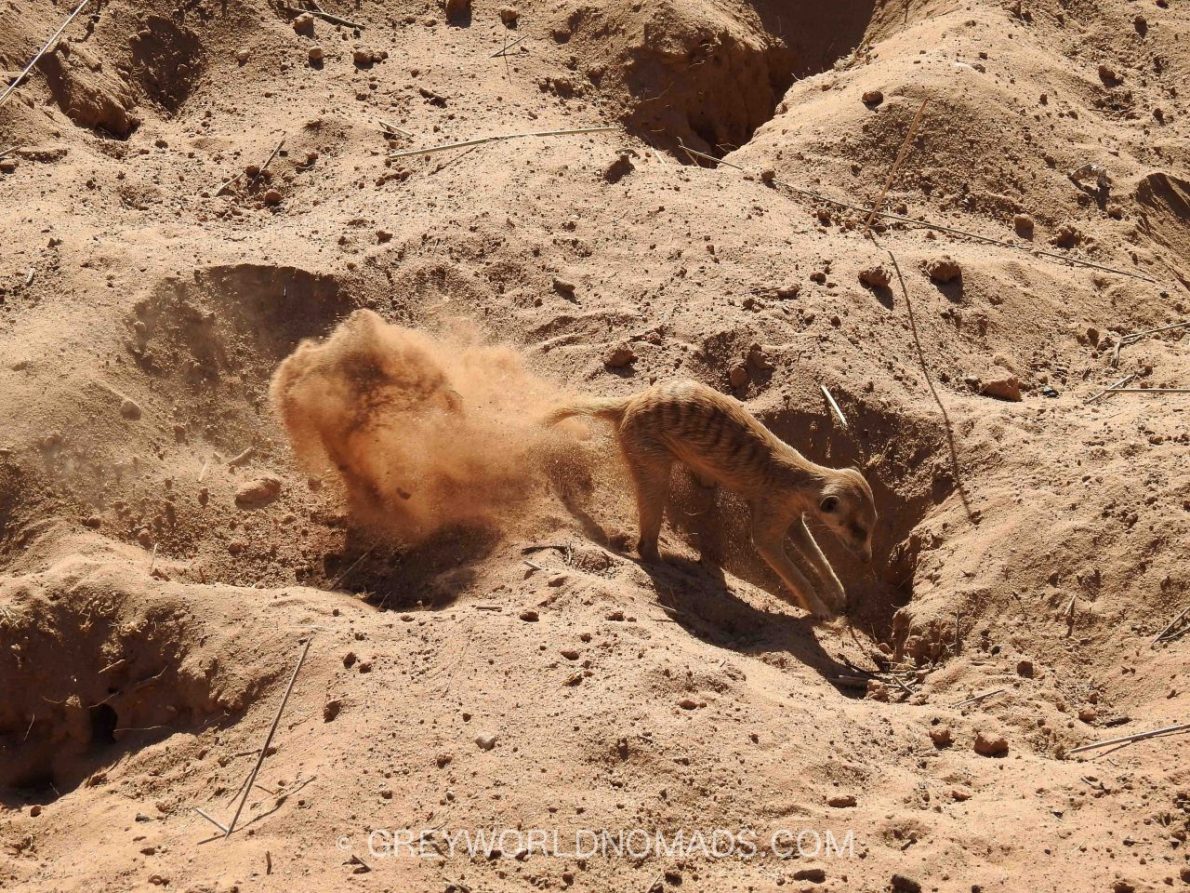 It’s not all about the big wildlife in the game parks. Small animals can excite me as much. Great was my pleasure as I heard the familiar purring sound of meerkats which they use to communicate together when they hunt for small game.
I stood up to have a better view on them. For more than half an hour I amused myself watching the meerkat family digging for insects in the soft sand just in front of us while one of them was serving as lookout for predators in its distinctive upright position. Meerkat watching the sky for raptors

Just another early morning at the Kgalagadi Transfrontier Park in South Africa.